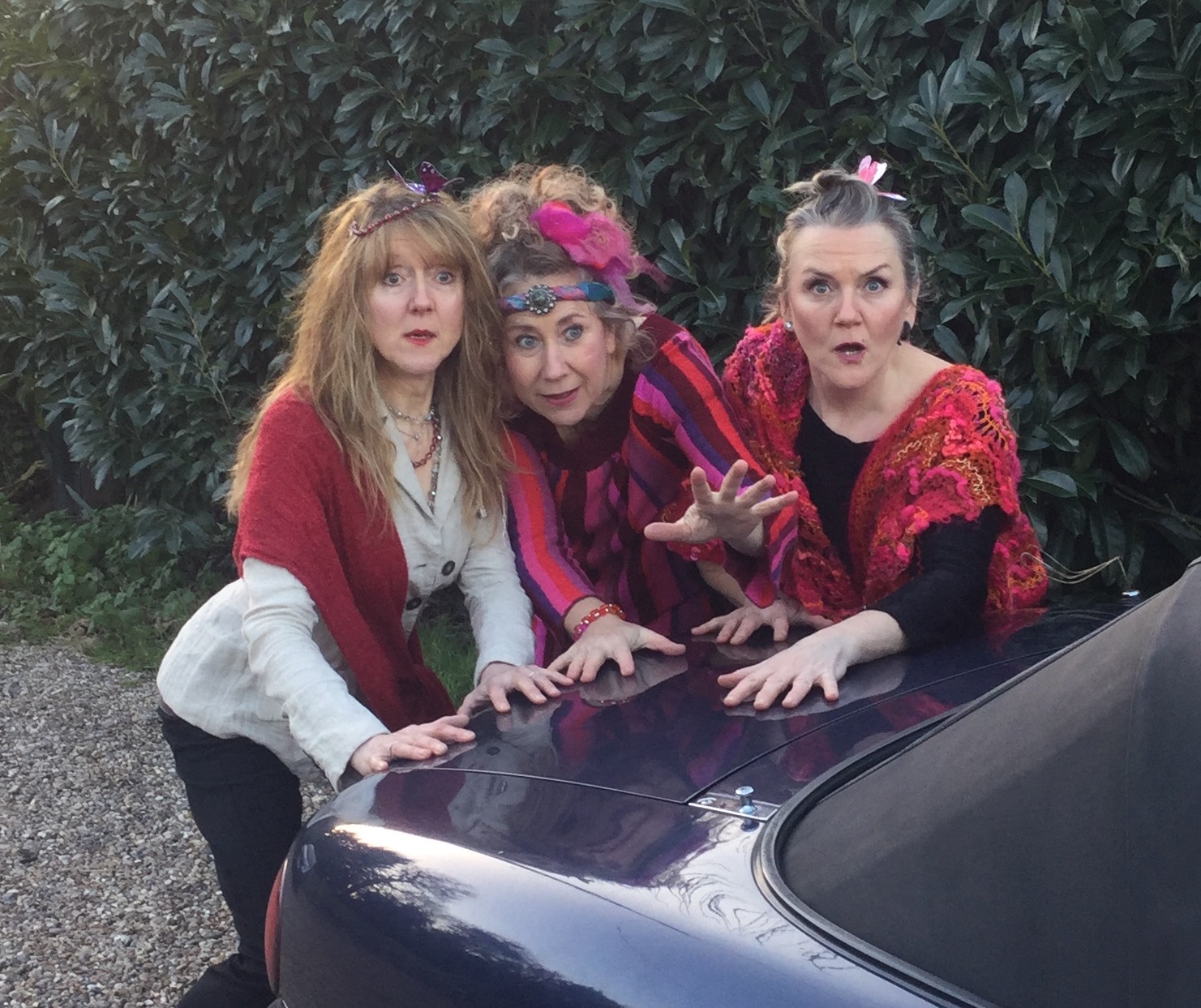 1pm on February 1st 2016: Thorpe-le-Soken sees a lively “Tricksy Trobairitz” (* 1) photoshoot near the WI Hall. Afterwards the jocular trio found themselves drawn to the reward of double chocolate brownies AND mochaccinos at “LOVE TO EAT”. The ‘only supermarket in the village’ was closed for the day, so the rush of people in this delightfully bijou café for lunch or tiffin was seriously on. We lucky 3 were already comfortably established for our nosh however, and were very well placed at the window table. We looked out at the ever-growing queue of poor hungry workers, who cast envious glances towards us as we chomped through our chocolaty feast. Adding insult to injury, we not only had the best seats in the house and were eating, but were taking up space (many apologies for this) by surrounding ourselves with increasing piles of manuscript. The queue watched on as caffeine and sugar rush combined to fuel our feverish creative juices, energy returning with vigor between mouthfuls of full-bodied soul food. We were set to be there for some time, engaging in spirited banter – with the odd additional double espresso to heighten the adrenalin, and send us over the edge!

We had much to celebrate and discuss: this was the first day of our “February music writing challenge”, and the weekend together had been incredibly fruitful by generating ideas for a new and exciting project. Things were really sparking for the ‘TWN Collective’: ideas that had been erstwhile skyped between Thorpe, Wimborne Minster and Nottingham were now being aired and ‘comprovised’ (*2) LIVE here in Essex….(one never knows quite what goes on behind the closed doors in The Village, and I am continuously astounded at the high quality of creativity here, whether it’s art, music, dance or holistic therapies)…. Meanwhile…. “are you sure you’ve got enough instruments?” quizzed my brother with irony, as he popped his head in to our rehearsal space. An armoury of musical gear glittered before him like a veritable magical Aladdin’s cave…. he was faced with a beautiful African Kora, an octet of various sized wind instruments, a loop pedal and several gleaming Tibetan bowls (plus much more beside!) …. while the two chanteuses and I weaved a path around the cluttered room. It was indeed a wondrous array for we three tricksy musicians to find the inspiration to express our ideas about courtly love.

So let me explain a little about our starting point…. The Trobairitz, writing in the12th century, are now acknowledged to be the first known female composers of western secular music (Troubadours being the male equivalents). They composed music, wrote poetical verse and performed for the noble courts in parts of France, Spain and Italy (collectively known as Occitania), and used this new art form to convey their most personal desires and life experiences in a secular setting. Racy and all extremely fascinating I hope you’ll agree! So…. bringing you back up to date with the here and now, “Tricksy Trobairitz (TWN Collective)” have come together to link the 12th century to the 21st century with our own frisky take on “fine amor” (courtly love).

The aim: to process our intriguing mash of composition and improvisation on tour around the world…..taking in Occitania of course! We will be on our “TWN Collective” creative crusade again in late February – meeting for a rehearsal in Dorset this time. We are planning to consolidate the material gathered thus far from our “February music writing challenge”, culminating with yet another challenge – a first performance! Wow, challenges come along like buses – none for an age and then 2 at once! …and with this power-house of inspiration, I am certainly flexing and stretching all my musical muscles at present. Watch out Wimborne Minster, the 21st century Trobairitz are on their way.

And a big thank you to our wonderful village, Thorpe-le-Soken, for holding the space for the first surge of ideas. As ever, I’ll let you know what happens!!

(*1) Definition of Tricksy Trobairitz: mischevious women musicians on the move

(*2) Definition of Comprovised: experimental and collaborative composition and improvisation