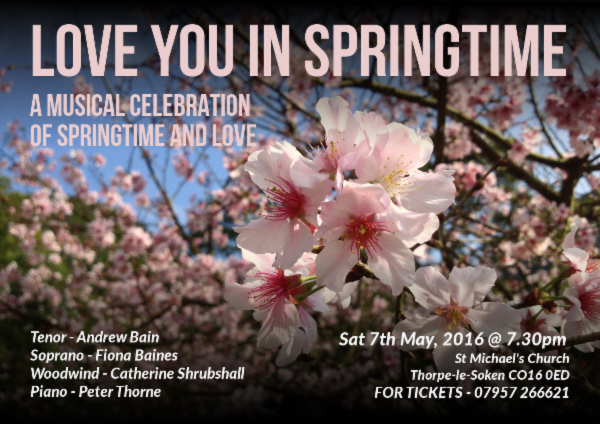 Thursday 5th May, 10:30pm: my phone rang…”Are you sitting down Catherine?” Ms Baines spoke in a most earnest fashion. “Why?” said I…”Well, I’ve just had a conversation with the not-so-vocal Andrew Bain (she faltered)….he was croaking at me that he’d lost his voice…. and was thinking he may not be able to sing on Saturday at the St M’s concert …and I’ve got a bit of a throat developing too”.  Argh!!!

The reality of this potentially disastrous situation hit me full on – and just as I was settling down for a good night’s sleep too: the concert was in jeopardy with our prize Tenor potentially indisposed, and possibly our tricksy Soprano too… so there was a real possibility of just our pianist, Peter Thorne, and myself performing the WHOLE concert  – with only 2 days notice!  Needing to process this I took to my bed, having just made a nerve-calming cup of chamomile, oat and lime flower tisane. To say I was feeling a bit out of sorts was an understatement, and I pondered on how my offer to play one number in the concert had turned into this predicament?!  Sleep eventually over took me, yet in the wee small hours I awoke with a start, in limbo between dream state and reality: I was looking at the wonderful Mr Thorne flailing away enthusiastically on bongos from the pulpit, whilst I saw myself standing ready to perform and trying to blow down my saxophone which kept sounding like a duck quacking….then I noticed Mr Thorne’s shirt, it was covered in live butterflies and we were being watched by the audience who were clad in nothing other than spring blossoms… positioned in strategic places…it was truly disturbing! I’ve clearly embellished on the dream my dear reader, but believe me, the anxiety was real enough!

Friday evening (the night before the concert): Ms Baines with tonsils intact arrived from the Midlands, enthusiastic and with ideas aplenty. She also brought the latest update from Mr Bain – he was still in London, less croaky and gargling furiously. We were not out of the woods yet.  So, we remaining 3 decided to retire to “The Bell”, endeavouring to thrash out a  “Plan B” concert programme. Whilst imbibing the local brew, we encountered the friendly and erstwhile secret Friday night dog club….(oops, not so secret anymore – sorry chaps!). Meeting the locals and indulging in calming pet therapy was frankly a very welcome distraction, and feelings of positivity and wellbeing took hold once more. Libation continued, and we steamed ahead with our concert planning with gusto. Eventually sleep time came and night gave way to the morning with no phantasmagorical happenings. Phew!

Saturday morning: Good news – Mr Bain, like a true Landemere knight, had conquered the viral enemy….and although under par, was on his way to fully participate in the “Love Me in Spring Time” concert. HURRAH. I pondered on his top notes, but was just grateful it wouldn’t be necessary to endure the wroth of the army of Essex fans with news of his absence.

Saturday evening: Mr Thorne arrived for the concert clad in a vibrant butterfly shirt and I had an irksome feeling of déjà vu. Maybe I had better just check on the audience…

All was well and what a wonderful evening we proceeded to have – “Love Me in Spring Time” was packed with style, professionalism, goodwill, humour, warmth, sophistication (and that was just the audience!)…..and the proceedings raised a healthy wedge for the church too. For those of you that missed it, here are just A FEW of my highlights:

Bravo to Mr Bain, Ms Baines and Mr Thorne for their unsurpassable performances – it was an absolute privilege to be part of it all. And of course, not forgetting a HUGE thank you to all of you who supported the event and made it so joyous ☺